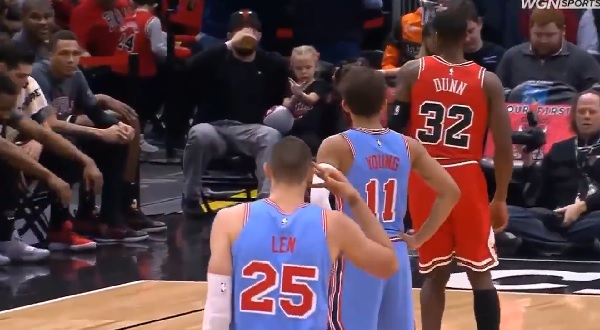 Just two days after an insane 168-161 game between the Bulls and Hawks that lasted 4 overtimes, the two squared off again.

Trae Young exploded for 49 points in the first game, while Zach Lavine had 47. It’s safe to say there was a little tension.

Bulls guard Kris Dunn was clearly sick of Young killing it and his frustration with the rookie spilled over in the first quarter.

After Young shot the ball post-whistle, Dunn walked right through the point guard as he was holding his shooting stance. Young threw an arm out and Dunn retaliated by smacking Dunn on the head. Teammates eventually intervened and not much came out of it beyond double-techs.

After getting 49 points dropped on his head last game, it appears that Kris Dunn is fed up with Trae Young pic.twitter.com/Er0IOOrazk

A couple quarters later, Young was feeling his shooting hand heat up and decided to take a three from near the logo, as he often does. When the ball went in with ease, he decided to celebrate the moment with a stare down of his defender, Dunn, picking up a second technical foul.

It’s crazy how soft the NBA has gotten.