This past weekend of BIG3 basketball was a highlight reel, hopefully you got to witness.

But if you didn’t, we’re going to show you what you missed out on.

We haven’t seen an in-game dunk like this in a while. NBA or BIG3.

Perry Jones picks a steal off Corey Maggette at the top of the key, then he stormed down the middle of the lane like a freight-train for the epic windmill dunk.

Timeout immediately was called, Power had to regroup after being on the receiving end of that brutal slam.

For those that weren’t aware, every BIG3 game is played to 50 points, win by 2 (or more). Therefore, Will Bynum scored 3/5 or 60% of Bivouac’s points that night.

Bynum was hitting and-one 3’s, cooking people with crossovers, and finishing strong at the basket. Will Bynum did it all.

Check his highlights from his record game

Just when we think we’ve seen his best, Iso Joe proves us wrong.

But this was the most impressive shot of them all.

This wasn’t even Iso Joe’s first 4-point dagger, but it’s undeniable that this one was special.

JJ caught a mismatch with Mahmoud Abdul-Rauf guarding him deep. Joe Johnson initially took him left around the 3pt line, backing in momentarily with his right shoulder. After barely stepping on the 3pt line, Iso Joe quickly pulls back for the deep step back 4-pointer for the win.

The crowd was wild, the energy was incredible, check it out here:

Now that we’ve provided your highlight fix, let’s look at the playoff picture now that the postseason is approaching.

No surprise here. This team has the consensus best player in the league and has only lost one game this season. The Triplets are an expansion team, yet they have had valuable experience in a short amount of time. They have blown out teams, grinded out close wins, and have taken a tough loss against the defending champs.

The Triplets are favorites to reach the Championship, rightfully so.

This team is built for the postseason. They have it all; a reigning MVP, veteran leadership, playoff/championship experience, and depth.

Corey Maggette has been dominating since returning to the BIG3 and Cuttino Mobley has led this team to success on multiple occasions. Power are ready to go back-to-back.

I’m shocked. This team was weak at the start of the season. Now, Kenyon Martin has coached his team into the playoff picture, and everything is starting to click. The defense has stepped up, role players like Samardo Samuels and James White have stepped up, but most of all Davis Hawkins has proven to be a consistent leader.

Trilogy are hot and are poised to make an upset or two in the playoffs.

Will they make it? Odds are, yes.

Bivouac has a bye week this weekend and their last game of the season is against the winless Ball Hogs. Josh Smith and Will Bynum have been on a tear. Assuming they keep up this momentum, they can be dangerous in the playoffs.

If Bivouac doesn’t choke against the Ball Hogs, a playoff spot is theirs for the taking.

Dark Horses To Make The Playoffs

The Killer 3’s have been in the playoff picture all season until taking a heartbreaking L to Bivouac last weekend.

This team can beat the Enemies in Week 9 after this bye week, but they need a little luck on their side too, hoping one of the playoff picture teams can fall off.

Frank Nitty and Stephen Jackson are among the best duos in the league, they won’t miss the playoffs without putting up a serious fight.

A lot must go right, but their playoff hopes are still alive.

First off, they need to win out. That means beating the 3 Headed Monsters this weekend in Miami at the AAA, then beating Killer 3’s in the final week of the season. Most of all, they need luck to go their way and hope Bivouac and Trilogy lose the rest of their games.

The Enemies have Craig Smith, Royce White, Gilbert Arenas, & Perry Jones III, so it’s surprising to see them in the hunt rather than the picture.

There is another bye week, so only half the teams in the BIG3 will play this Saturday (8/10) at the American Airlines Arena in Miami, FL.

Let’s look at the matchups you need to watch 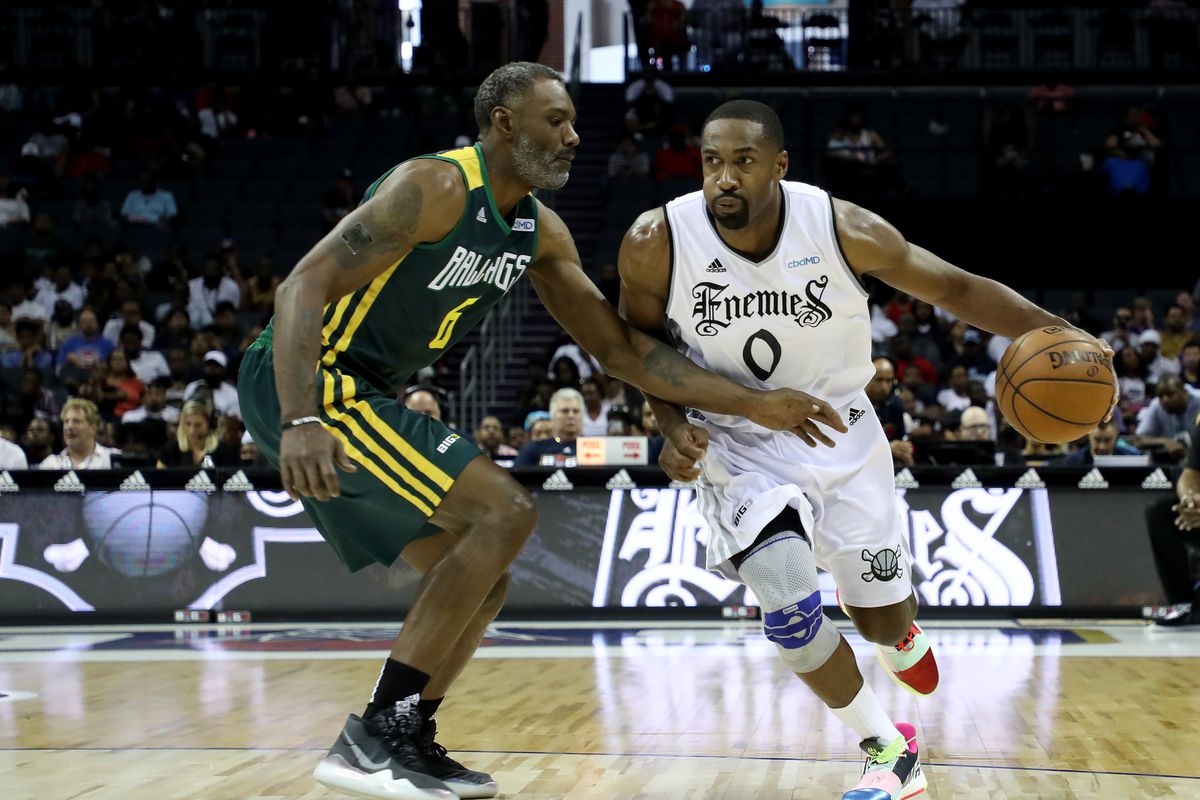 Both legends have cemented a legacy as playmakers & shooters. Gil and the Enemies have everything at stake here now that their playoff chances are becoming slimmer. However, the 3 Headed Monsters have yet to be eliminated as well, so they’ll fight for their lives more of the same.

Here’s the deal. Mahmoud is more of a pure sharpshooter than Gilbert Arenas, so we expect him to utilize some screens to free himself up for quick catch and shoot opportunities.

As far as Gilbert Arenas goes, he has the advantage in this matchup because he’s bigger, height and weight. Therefore, we expect Agent Zero to use his body, backing into the paint and driving past Mahmoud to score.

Everything is on the line for both teams, so we anticipate solid games from the legends.

Both MVP candidates should put on a show Saturday (8/10) at 9pm Est.

Although Corey Maggette and Power are pretty much a lock to make the playoffs, don’t expect them to take their foot off the gas. Nevertheless, Stoudemire and Tri-State are among the teams that have yet to be eliminated, so he’ll do everything possible to squeeze Tri-State in the postseason.

High scoring games are in both players future.

Maggette, as always, will mix it up with shooting, driving, and bully ball. Amar’e will play in the post +80% of the time and reap the benefits.

I’m expecting both men to drop at least 20 points. 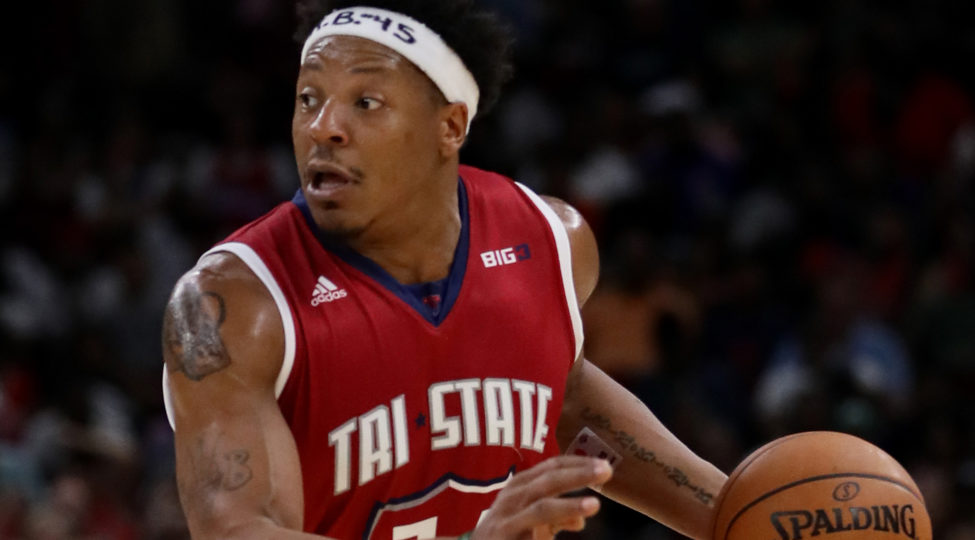 David Hawkins has been on a roll, and now that his team (Trilogy) is in the playoff picture we doubt he’ll slow down. Respect to Hawkins for putting on a scoring display almost every night since Trilogy started 0-2.

Ricky Davis and Ghost Ballers have had some tough luck this season. But, no excuses. They are still in the hunt for a spot in the playoffs, thus it’s time to step up. Ricky Davis is a leader on this team, and they’ll need him to be at his best to win.

Ricky Davis is a solid shooter, and overall, a balanced scorer. Therefore, he will need to pick his spots wisely and mix it up all game with driving to the basket and spot up shooting. Also, Ricky Davis is a good defender, so look for him to gain momentum from a steal or block that leads to a scoring play.

Catch the BIG3 live this Saturday 8/10 starting 8pm Est on CBS & CBS Sports Network. To see if tickets are in your area, visit big3.com/tickets

Vince Carter Agrees To Return To Hawks; Will Play One Final Season